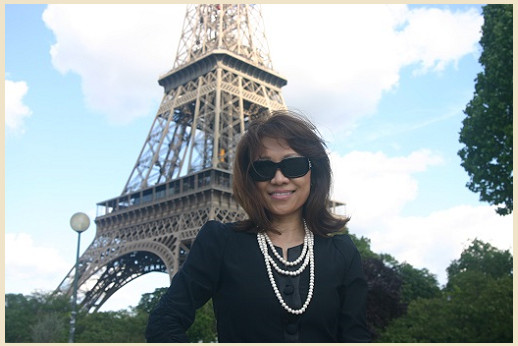 Spawn, literally, of haute couture, Diana Workman was born into the business of high fashion.  Her mother was a designer in Taiwan, where Diana was raised.  Sketching her own designs by the tender age of ten, Diana, being a spirited child, nonetheless refused to follow directly in her mother’s footsteps.  Instead, she focused her academic energies on business administration.  After graduating from college, Diana became a successful business entrepreneur, running her own advertising company and PR consulting firm.  She topped off her triumphs by writing and publishing two books, one on e-commerce and another on marketing strategies.  Still, having been inculcated from birth, Diana never lost her passion for fashion.
While on a sojourn to the other side of the world, Diana rediscovered her fashion soul. With roots stretched across the planet, destiny’s knock seemed louder than usual. Then, it happened. A sense of enlightenment washed over her like nothing she’d felt before. Inexplicably, the path to be pursued went from a flickering consciousness to a cosmic supernova. Illuminated by this bright light, she knew instantly what had to be done.
Like a dandelion cupped lightly in both hands, buoyed by the soft lavender breezes of that fleeting moment, Diana raised her will, metaphorically, and blew its florets gently toward fates endless firmament. She would be a designer, after all. Of course, without effort, the inevitable never comes to pass. Fully aware of this, Diana developed the mode to make it happen. And so was born dianaira®.
The mission of dianaira (pronounced ) is to bring more comfort, more convenience, and more choices to the lives of women. Diana accomplishes this not only by choosing the best fabrics, but by careful and clever design. Many of her pieces are interchangeable and reversible, along with being classically stylish with a French flair. In fact, the “ira” on the end of dianaira stands for interchangeable, reversible apparel. In choosing dianaira, you’ve optioned up to high quality, high versatility, and high class. Your dianaira wardrobe will endure long beyond the trendy pieces of the current season’s vogue.
Diana has a remarkable capacity to connect with people. This, coupled with her uncanny ability to visualize color, fabric, and style, Diana is able to weave these defining elements of timeless apparel into patterns of panache permeated with a love and genuineness that can actually be felt when wearing her designs. “People say this to me all the time,” she says, “they feel a good spirit when wearing my designs; and each time, I am humbled by it.”
With intelligent eyes and a beautiful smile as big as her heart, Diana laughs warmly and says “I love what I do. I was born to do it.” Indeed.
— Martin Pierre Bellange